Hex.5 and 6: the needed change

Hex.5 XU, Waiting for a change of weather

XU1. The above part, yu3, is 'rain', the lower part, er2, a beard. But in Wang-HongYuan I found two apparently older characters. Top left: a person below rain (1), the other one a sweating person (2). In many old characters there is hardly any distinction between the rain and the sweat: the sweating dancing shaman tells the rain how to fall. Click here for the full story about the dancing shaman.
Bottom right: the modern character. Bottom left: compounds and words with xu.
XU1: Need, require, demand; expenses, provisions, necessaries; hesitation, delay, tarry, wait, waiting with confidence, waiting for rain to begin, waiting for something one needs; essential, necessary; early glutinous rice with small grains.
Pronounced as NO4: weak, hesitating, supple (leather).
As YUAN3: supple, flexible, incomplete.
As NUAN4: weak, timid.
Interchangeable with another character XU1 (head-hair or head-water) with the same meanings, but also 'beard', Ritsema +Karcher: hairgrowing.

Characters and words at left (xu is part of these words or compound characters):
1 Mawangdui: (cloth+need) short tunic; very fine and light silk (a silk garment for the winter sacrifice)
2 (silk+need) frayed or thin silk (occurs in hex. 63.4)
3 (heart+need) cowardly, weak
4 (not time its need) rainy day (fig.; i.e., be prepared for a time: the time has no need which is not fulfilled)
5 (supply need) supply and demand, supply demanded goods
6 (heart need) essential; indispensable
7 (need seek) requirement; demand

In compounds, 'waiting', xu, seems most of all 'needing'.

More about shaman and rain dances.

Hex.5 Is waiting in an active manner, waiting for an opportunity in order to grasp it. Very alert, so it will not escape your attention or your hands, or actively bringing it about. Hex.5: "Everything comes to the one who waits". It is a Chinese proverb and it does not mean to sit down and expect. Make your mind open for it to happen and go on living. When the moment comes that it might happen, it finds in you a fertile field to receive it - and it will happen. It is a frame of mind which makes everything happen, not just one specific thing. It means living every moment as it is, without a program but open for life.
In the MaWangDui I Ching the name of this hexagram means a silk garment for the winter sacrifice. Like celebrating Christmas: opening your mind for the good things of winter, for a time of darkness and cold on the brink of change, but also of reflection and togetherness, because wishing for something together makes it stronger.

Hex.5 is the opposite or 'Pang tong gua' of hex.35, where you grasp chances to turn them into much more. Two sides of one medal. But an opposite works like the shadow in a mind: don't neglect that side, or it will haunt you. Your eagerness to follow your wishes and plans might spoil or even destroy your ability to wait for the right moment or for the forces in play to grant your wish, and the other way: waiting might make you lose your chance.

Lines:
Line 1. The midwinter sacrifice to Heaven was performed on an altar in the Southern outskirts, the midsummer sacrifice to the Earth was performed in the Northern outskirts by burying offerings in the earth. Probably there were more kinds of sacrifices and ceremonies in the outskirts.
Lines 2 and 3 may be about too little and too much rain. In a time of drought there will be strife, in a time of mud there is a lack of contact which brings the danger of robbery.
Line 6 might be about the water of the river rising, and people have to go up the mountain and find shelter in a cave. One needs to respect everyone, or there will be trouble.

Hex.5 and 6 (each other's qianyao or upside-down) are the pair of needed changes. In 5 you wait and hope and implore the spirits, in 6 you have to decide if you fight for it or not.

The trigrams: Water above Heaven.
Clouds rise up to heaven: Waiting for the rain to start, sometimes to stop. The noble one drinks and eats and reposes relaxed.
Heaven below or inside Water. The soul (Water) is formless, but the light of Heaven is inside. The possibility for organizing is present, so waiting makes sense. It might be something you need from outside, or from the spirits or your inner wisdom. "Everything comes to the one who waits" is a Chinese proverb and it does not mean to stay sitting and expect. Make your mind open for it to happen and go on living.
It is a frame of mind which makes things happen. It means living every moment as it is, without a program but open for life.
In the MaWangDui I Ching the name of this hexagram means a silk garment for the winter sacrifice. Like celebrating Christmas: opening your mind for the good things of winter, for a time of darkness and cold, but also of reflection and togetherness if you are open for it.

SONG4. The left part of the character is yan2: a mouth (kou3, 2) with a tongue or making a sound (1). Maybe this yan2 identical to yin1: sound. The right part is gong1, the highest one of the five titles of nobility in ancient China, the Gong or Kung. Probably the Gong was the ultimate authority to resort to when one needed a judge. This part consists of divide, ba1 (3) and either mouth, kou3, or private, si1 (4). Divide might indicate the fair division of property and rights. According to Karlgren some of the forms of Gong seem to suggest a phallic interpretation (5). Gong's meaning is further: public, make public, fair, impartial, collective, common; accepted, male (of animals), father, (official place:) palace.
SONG4: Lawsuit, litigation, argue, demand, justice, publicly. Old: to accuse, regret, blame.

In compounds 'lawsuit', song, is mostly about arguing in court or before an arbiter. 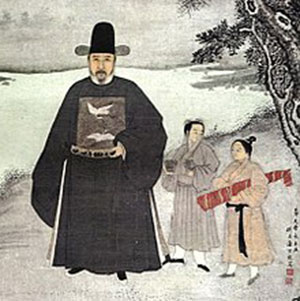 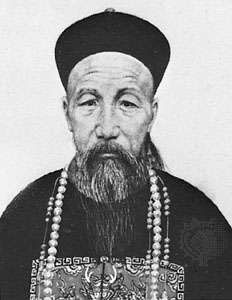 Two scholars, both with the badge of their rank on their breast. At right Zeng Guofan.

Left picture has 'judge' and 'speak', right picture 'speak' and 'judge'.
'Judge' is mouth' and 'divide'. It is the Gong, the one who has this authority.

Hex. 6 is about your inborn need for truth and a life and space of your own. It depends on others if you will be able to get it. You will have to discuss for it or prove your right for it.

Kerson Huang: "Meanwhile, the state of Zhou had gained influence among all the vassal states because of its wise ruler, King Wen (The Humane King). It was said that all the states would bring their disputes before King Wen to be settled because they could always be assured of a wise and fair arbitration".