The rain dance of hexagram 5

Bronze wu-characters.
The rain and the sweat look very similar.

In hex.5 it says 光亨 'shining success': the person-with-fire who creates 'heng'. (Hilary)

Wikipedia, Rainmaking_(ritual)
Wu Shamans in ancient China performed sacrificial rain dance ceremonies in times of drought. Wu anciently served as inter-mediaries with nature spirits believed to control rainfall and flooding.[Schafer] "Shamans had to carry out an exhausting dance within a ring of fire until, sweating profusely, the falling drops of perspirations produced the desired rain."[Unschuld] 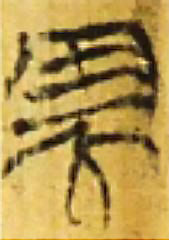 Two characters from silk or bamboo strips, both with a dancing figure below 'something' (the rain, but difficult to recgonize). Both show the moving legs of the dancer.

Abram articulates a less supernatural and much more ecological understanding of the shaman's role than that propounded by Eliade. Drawing upon his own field research in Indonesia, Nepal, and the Americas, Abram suggests that in animistic cultures, the shaman functions primarily as an intermediary between the human community and the more-than-human community of active agencies — the local animals, plants, and landforms (mountains,
rivers, forests, winds and weather patterns, all of whom are felt to have their own specific sentience). Hence the shaman's ability to heal individual instances of dis-ease (or imbalance) within the human community is a by-product of her/his more continual practice of balancing the reciprocity between the human community and the wider collective of animate beings in which that community is embedded.

Animism is not the same as pantheism. Animists believe everything to be spiritual in nature, they do not necessarily see the spiritual nature of everything in existence as being united, the way pantheists do.
Animism entails the belief that "all things have a soul". In some cultures only living things, in other cultures rocks, wind, thunder or places have souls as well.

The physicist Nick Herbert has argued for "quantum animism" in which mind permeates the world at every level.
"The quantum consciousness assumption, which amounts to a kind of "quantum animism" likewise asserts that consciousness is an integral part of the physical world, not an emergent property of special biological or computational systems. Since everything in the world is on some level a quantum system, this assumption requires that everything be conscious on that level."

Ashley Curtis has argued in 'Error and Loss: A Licence to Enchantment' that the Cartesian idea of an experiencing subject facing off with an inert physical world is incoherent at its very foundation, and that this incoherence is predicted rather than belied by Darwinism. Human reason (and its rigorous extension in the natural sciences) fits an evolutionary niche just as echolocation does for bats and infrared vision does for pit vipers, and is—according to western science's own dictates—epistemologically on a par with rather than superior to such capabilities.
The meaning or aliveness of the "objects" we encounter—rocks, trees, rivers, other animals—thus depends for its validity not on a detached cognitive judgment but purely on the quality of our experience. The animist experience, and, indeed, the wolf's or raven's experience, thus become licensed as equally valid world-views to the modern western scientific one—indeed, they are more valid, since they are not plagued with the incoherence that inevitably crops up when "objective existence" is separated from "subjective experience."

If you want the scientific 'proof' of the fact that the shaman knew what he did, then check out Dean Radin's online interviews and his books. An early one: 'Supernatural', last one: "Real Magic".