'Solemn", usually translated as "look up" or "presence" is yóng.

Yóng is composed of two parts, at left 1: picture of (spider-)monkey. Meaning: use continually, benevolent. Part 2: figure with big head (could it be an animals mask of a Wu?)

But the old character of the left part yong “use continually, benevolent” (Ricci 13020) looks like the character yong, “availing of” (Ricci 13019, picture of a tripod) with an extra addition at the top. Seems to me more likely than a monkey. The meanings all have to do with continuality, totality or something close to it. Yongyong: use continually. Yongge: a tripod which is continually in use. Jinyong: bronze heads which cover both extremities of an axle. Yonghui: show benevolence. Yongdong: use until the end of the defined period. Yongyong: give all one's efforts. Yongzhi: attained maturity of spirit.

Meanings of jiă: false; fake; phony; artificial.〈Law〉conditional; tentative. Borrow; avail of. If; supposing.
Jiă dào is via, by way, jiămíng is pseudonym (like a second skin).
Harmen translates more like “lend itself, in the place of, put into service”.

Above: from Wang Hongyuan "The origins of Chinese characters", Sinolingua Beijing, 1993.
Jia: false, to borrow. Two hands obtaining ore from a quarry. According to most other sources, the left part means double skin.

'You', the way of flowing water.
(you wang, having a place to go) 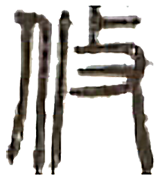 The character 'you' on oracle bones shows a river and a hand with a stick: walking along a river or crossing it by testing the ford, walking quickly. Its meaning also includes the way the water flows: you-you is leisurely, long-term, fast.

'You' means one has a direction and follows the path to get there. Before a verb it turns it into a noun, giving it 'substance'. You wang: a go - a place to go; you ha: a like - what one likes or loves.
The continuous flow of the water makes the river a river, a noun. Stagnant water is not a river. Walking like flowing water is a sign of knowing where one goes. One of you's meanings is 'knowing'.
A place to go is a decision, a direction, not something which just happens.