57 When your number comes up

In many cultures there are images of gods or other forces which make life begin and make it end. Thunder makes seeds germinate, Wind is the 'chooser' which decides about the life-span. 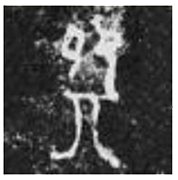 The character Xùn is a picture of a table with two seals on it. Later two hands were added. Wieger: “To elect, to choose. Two 卩 seals of officials, placed upon a 兀 table, to be committed to those who were elected, chosen."

Your seal has to do with what you are made of, and also what you do with your talents and opportunities. Nobody can see the wind, only its effects. Treebranches swaying, dust-devils dancing, waves, bending grass. The wind penetrates, but where it cannot enter, things stagnate and decay. You are supposed to develop yourself, to move and to enter adventures, and never ever come to a standstill. Because 'you' don't matter, what matters is what you do with it, how you move.
In many cultures wind and fate are strongly connected. Xun is about feeling the wind: the first faint seeds of what can or will happen. At that moment, when you notice them, you act - or not. Whatever you decide to choose, knowingly or not, you decide about the future, about fate.

Shuogua: Xun suggests the idea of wood; of wind; of the oldest daughter; of a plumb-line; of a carpenter's square (because it calculates); of being white; of being long; of being lofty; of advancing and receding; of want of decision; and of strong scents. It suggests in the human body, the idea of deficiency of hair; of a wide forehead; of a large development of the white of the eye. (Among tendencies), it suggests the close pursuit of gain, even to making three hundred per cent in the market. In the end it may become the trigram (or hexagram) of decision.

See the blog where you can post a reaction