The maiden of hexagram 54

歸 妹
Nobody wants to get hexagram 54. The poor maiden who has has no say whatever in her life, who has to adapt to things which have nothing to do with her own wishes. They are wrong! 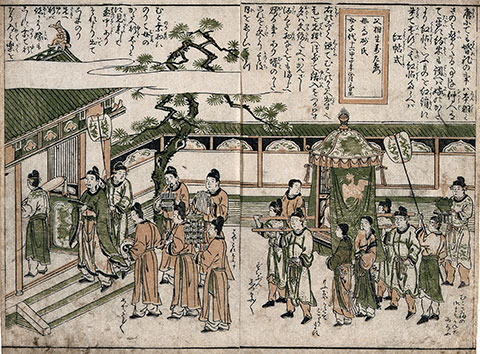 The younger sister of emperor Yi in hex.11 line 5 is also a 'marrying maiden'. She married Wen, and became the mother of a dynasty which lasted for centuries.
She linked the two families together, bringing the ancestors of the powerful Shang dynasty into the small clan of the Zhou. She was an important reason of their success.

Right from the start an important task is assigned to her. She has to care for the succession of the generations. One of her tasks is to look after the house-altars. Making sure the ancestors are well cared for, so they will be beneficial for the family and its successors.
It is a token of her importance. She is an essential link in the succession from one generation into the next. She brings the new family members but she also brings the support of the ancestors into the happiness and success of the family, she connects her own ancestors with those of the family.

The lower trigram of 54 is trigram Lake. It also can be a marsh, where innumerable creatures connect, exchange, fight for space and depend on each other.
The upper trigram is Thunder, the lifegiver, energy, birth and impregnation. The start of a new time is very important for the success and endurance of everything which comes after.
For every big idea or enterprise you need a creative beginning. Most things or ideas already exist, but sometimes someone puts two things together and creates a third. It is the basis of big firms, of art, of a family, of anything you bring into the world which can last for a long time.
Hex.54 tells you to listen and to adapt. To examine and care for what came before and to nurture what grows. If this small beginning is treated right, it can grow beyond your own scope.
"The noble one, through the eternity of the end, understands the transitory."
If you want to post a reaction, you can do so HERE