The plow of Thunder

Zhen can be the reason why something starts, but most of all it is the moment in time when something starts, a sudden change, a beginning. When the weather and time of the year cause the farmer to start plowing the field. After that it can be sown in, the plants will start growing and finally there will be harvest. Zhen is the start of a new cycle. 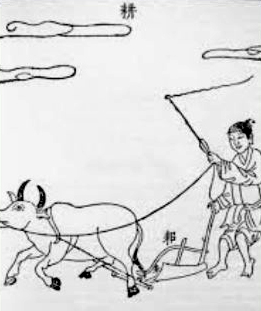 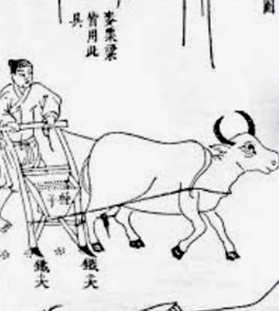 The lower half of the ideogram of chen, plow (rotated). 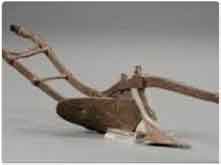 Several other versions of chen's ideogram. 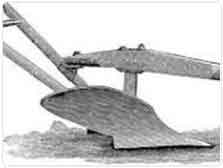 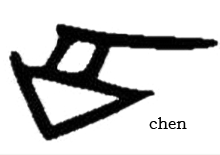 Triangular-shaped stone ploughshares are found at the sites of Chinese Majiabang culture dated to 3500 BC around Lake Tai. Ploughshares have also been discovered at the nearby Liangzhu and Maqiao sites roughly dated to the same period.
The British sinologist Francesca Bray argues that the plough was known at least by the Longshan culture period (approximately 3000 – 2000 BC).

The ard, ard plough,or scratch plough is a simple light plough without a mouldboard. It is symmetrical on either side of its line of draft and is fitted with a symmetrical share that traces a shallow furrow but does not invert the soil. In its simplest form it resembles a hoe.

In the west we have a similar symbol: the scythe of father time. It indicates an end, of the year, of a life. It is also a time marker. After the old year ends, at 'new years eve', a new year starts.