The Ding-sacrifice and setting the seasons right

The family of Dĭng (the cauldron of hex.50), zhēn (divination), and Dìng (asterism and set right).

https://en.wikipedia.org/wiki/
Nine_Tripod_Cauldrons
When Yu the Great had finished taming the floods he demanded a tribute of bronze from the Nine Provinces and cast 9 tripod cauldrons. They were viewed as symbols of the authority given to the ruler by the mandate of heaven.

Members of the scholarly gentry class were permitted to use one or three cauldrons; the ministers of state five; the vassal lords seven; and only the sovereign Son of Heaven was entitled to use nine.

鼎 貞 定
Dĭng the cauldron, zhēn divination and Dìng the asterism are all cognate, they have all to do with setting right. Especially the alignment of a site (city, grave) with Heaven. The asterism's stars were used to find the Northpole. 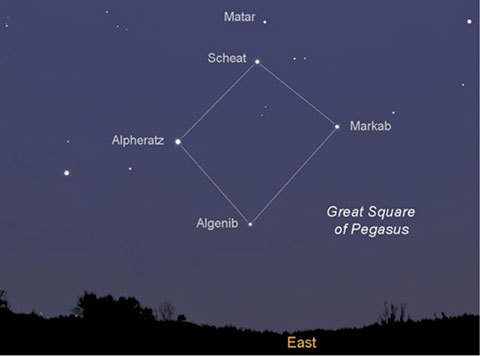 Our world turns around the 'axis' of the earth. Today the Northern center is close to the Polestar, the Southern close to the Southern Cross.
During the mid-Zhou dynasty two stars of the asterism Ding, the great square of Pegasus, were used to find the northern center of the heavens. The name Dìng was written as a square □.
Another concern: the seasons. If they didn't follow their strict pattern around the year, disasters threatened, like famines or pests. The emperor was most of all responsible for fixing the seasons and measures.
Shēng, the name of hexagram 46, is a sacrifice on Mount Qi to set the measures right. Shēng is a measure: a ladle or dipper, 10 shēng is a Dǒu, which is also the name of the Big Dipper, the clockhand which indicates the time and seasons.

The characters in the group of dĭng and zhēn all have the root 'rectify' (make straight, square up).
Asterism Dìng 定 is the celestial square or Temple, and in its earliest form, dīng 丁, it is written □, a square. Dìng 定 is a very common character: to fix.
Zhèng 正 means regular, set right, standard (the first month of the calendar is zhèng).
Zhēn 貞 (in Wilhelm 'perseverance') is proclaiming the divinatory incantation (probably during a ritual Ding-sacrifice), submit to the oracle and to introduce the charge to the bone in the Shang divinations.
See the article by David Pankenier "Getting 'Right' with Heaven and the Origins of Writing in China" (www.academia.edu).