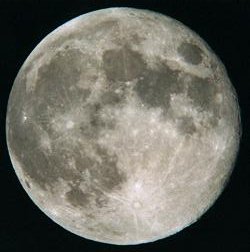 The Oracle of the Moon

I know the Yijing since the sixties, and my fascination with it never left me.   Thinking about it as a book of wisdom, exploring it, finding forgotten meanings that suddenly open up a sentence, or using it as an oracle, it all helps to make the voice of my intuition audible. Usually the voice of common sense is much louder, but this book gives sound to that faint voice within. It makes my intuition the guide of my life.

And where does the moon come in?

Some say, the character I (in Pinyin: Yi), CHANGE, like in the name of the I Ching, is a combination of the sun and the moon. The modern way of writing the character certainly looks like that.

A square, sometimes a circle, with a line across, is ‘sun’, and the lower part a moon-sickle with rays.

Others say it represents a lizard or chameleon. If one adds the character for insect, it is the chameleon that has the task in every Chinese house – or tent – to catch all flies and other insects. Dries Langeveld told me this. He had gone to the zoo in Amsterdam, because they have one there. Its color cannot change, but it is very indefinable. For one hour and a half it did not stir, and neither did Dries. Then suddenly it flashed around everywhere. A perfect animal to portray changes as well as 'easy', the main meanings of Yi.

In old times characters were not specified. One character served for many words. Yi was change, easy, chameleon, kick, tin and give. Later ‘metal’ was added to tin, and ‘insect’ to chameleon, so no mistakes would be made. Yet in old texts all those meanings are possible. So the chameleon might be an explanation.

But if you look at the oldest form of the character, at least the oldest one I could find, it looks like a moon with rays: moonshine.

But then Harmen comes aqlong and he tells me, the lines are the name of a sacrifice. He is thorough, I trust what he says. And if he is wrong, he tells everyone immediately. So the character as a whole is a sacrifice to the moon, in the dark. Used as verb: give, grant or bestow.

In all cultures, even today, and also here in the West, the moon stands for changeability. And that is not only an idea. The moon brings about the tides in the seas, and also the tides in all living creatures. In astrology too the moon is the changeable part of the personality, the feelings that react to everything, always different, in contrast to the sun, which is the more conscious, visible and stabile part.
The moon was not only changeability because of its influences, but also because of its phases. New, half and full moon. When electric light did not exist yet, the phase of the moon was very important. When the weather changed and the moon was full, the farmers could work through the night to get the harvest in before the rains. Full moon meant safety, new moon meant danger. Scum and ghosts love new moon.
Yi means also ‘easy’. And ‘exchange’: money or goods changing ownership. It is in the name of trade-companies and banks. The first time you see that, as an I Ching-lover, it feels almost like blasphemy.
When I imagine those old days, I think: it is not either the moon or the chameleon. It is both. They had both, and everybody knew both. But writing was unknown. They talked, and things had a name.
Personally I rather think the chameleon was named after the moon than the other way round, but by the time they made a character for it, that was not important any more.
And finally - Chinese don't have many different sounds, and they often combine meanings when the sound is the same, even when the character is different.

So feel free to combine (in your mind and within reason) all meanings of characters pronounced yì. Mind the sound: the downward stroke means the sound goes down.