completing (by bringing all together)
and fixing (for permanence).

When King Wu had conquered the Shang, he could not sleep at night. He was worried and full of fear, because he had 'not yet ascertained Heaven's protection'. He decided to build a new city in which the sacrifices to Heaven would be valid again, and entrusted Tan, the duke of Zhou, with the planning and execution of this work.
Tan asked the tortoise-oracle and found a site for the new city at the river Luo. The new city was called Luo-Yi. King Wu died and his successor, king Cheng, built the city, and so another name for this city is Cheng-Zhou. Cheng and Xian, the name of hexagram 31, are written almost the same, and are interchangeable.

This city was never used as capital by Cheng, it was only a place for sacrifices, a home for the ancestors. Here, the sacrifices to the ancestors could be brought, in new temples, where all the wrongs of the past no longer existed. If Wu only conquered the Shang, without honouring the goodness and greatness they had also brought in the past, the spirits would not help him. New life relies on the benevolence and support of all spirits involved, of past and present. And being a descendant of a Shang daughter, they were his ancestors too.

Xian is also the personal name of Tang the Completer, the founder of the dynasty of Shang. Tang the completer: the one who brought all together.

Xian2: together, all, unite, case or cover, complete, fully, generally, act together, union, harmony, universal, continual, everywhere, to move, to touch, influence, transform, (dissatisfied, resent ?). Name of the music of certain emperors, salt, salty. Xiang you (unite have): have under control (the 9 provinces). Cheng2: to become, turn into, to bring to completion, succeed. In the Mawangdui Yi Jing this hexagram is called qin1: respect; obey with respect, imperial. When respect is missing, then the other meaning of xian emerges: wounding with the mouth.

It is only permitted to influence (in order to make someone do something, or to make a connection), if the influence is aimed at building a city with a temple. Or in order to found a state, a solid lasting structure together. Influence for personal ends, for selfish wishes, to take advantage: these are all evil.

To hexagram 31
to index origins

When this centre has been built, it needs ‘sanctifying’, steadying, so it will endure.

People plough a circular furrow around new cities, or circumambulate them, or enclose them within a city wall. Lovers share rings, the king is crowned, the shaman draws a circle around the patient. The circle and the spiral are symbols of time, of the endless succession of identical moments. 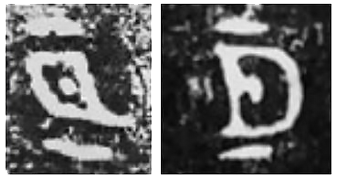 If it is a moon, the meaning is 'crescent moon', but the usual meaning is 'continuing from one point to another, circling round' and so 'stable, fixed, perpetual'.
The moon is a symbol of cycles, changing perpetually but always in the same pattern.Waxing, waning, neverending and always coming back again. An image for a ferry, but also for steadiness, going your road over and over.
The two lines (not very visible in '2') are an old form of shi4, altar, their meaning is 'connected with religion'.
Heng2: Constant, regular, persevering, lasting, continual, (loan for:) increasing moon, spread out, everywhere; the name of the spirit, which revives and protects the Huan river, the river which flows along the Shang capital.
In the Mawangdui Yijing: Heng wo, ‘steady us’. Wo is a weapon used to sacrifice victims, and it is ‘us’ (‘us’ Shang, ‘us’, a group conducted by the king to war or the hunt), our territory, a benefice (from spirits, rain, harvest). So I think 'heng wo' means to steady the good things coming to us, our good fortune.

According to Waley, Heng might be a rite performed at the first appearance of the new moon and intended to make a favourable condition of affairs 'last through' the lunar month. More generally: for every auspicious omen that is not only for one act, but for an undertaking of a more permanent nature, it is necessary to fix the good fortune, so it will last through the entire period for which it is required.

Waley: "We have some evidence that the typical stabilizing rite consisted in drawing concentric circles or a spiral round the omen-objects'. In old script the element at right (2 and 3) is often written as a spiral or two concentric circles between two lines".

As for fixing an omen, I think this ‘succession of identical moments’ might be a clue. Fixing an insight so firmly in one’s mind that every time this same situation arises, one immediately has the same reaction. Or this insight comes back, and one knows what to do.

31 and 32 are inseparable. 31, an influence accompanied by respect: both respect for the other person (or other influence), and also respect for your own dedication to it, taking it really seriously, will initialize a sacred (lasting, true, rich) structure.

And 32: a structure can be made solid and lasting through an endless repeating of this original act of influence: giving it a deep imprint, changing your paradigm for good. Repeating it makes the imprint, but a changed paradigm will also cause it to be repeated endlessly in the rest of your life, whenever there is a need for it.

When you consult the oracle with respect (taking its answer seriously, not asking superficial questions, not bending the answer towards your own wishes, not limiting it to human time), then you create a sacred base for your own tao.

You fix the omen by making it part of your soul, so that when you need a solution for a comparable situation, you know. Your soul immediately gives the right answer - like someone who has trained himself and can use his skill in many different situations.

Hilary, in a mail: “Stephen Covey says that what you do comes from your personal paradigm, and if you try to change the routine without changing the paradigm, sooner or later the original patterns will come back. When I asked Yi how to fix its answers, it said 31, unchanging. If this means making a permanent, new place for the influence to enter, it actually starts to make sense.”

Stephen Covey et al, in "First Things First": "The way we see (our paradigm) leads to what we do (our attitudes and behaviours); and what we do leads to the results we get in our lives. So if we want to create significant change in the results, we can't just change attitudes or behaviours, methods or techniques; we have to change the basic paradigms out of which they grow. When we try to change the behaviour or the method without changing the paradigm, the paradigm eventually overpowers the change.”

To hexagram 32
to index origins