The image of hexagram 08
Bĭ, stand by

Hexagram 08 has trigram Earth below or inside, Water above or outside. Earth does what is being asked, what circumstances dictate or allow. She creates reality. Water goes on and on and is hard to stop. Together a power to be reckoned with.

What does it mean, 'inner' and 'outer' Trigram (popup)

Water over the Earth: it is an image of the big river flooding the earth, devastating everyone living in its range. The only way to fight this kind of danger is to be like water, to go on an on, no matter what the cost or how long it takes. Earth also means 'a mass', a large group, which may be the only way to summon enough strength. When a person with an unstoppable power like water leads a group, big enterprises can be completed. 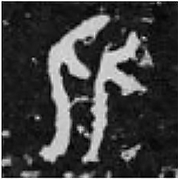 The old diviners gave this combination of trigrams a name: Bĭ. Having each other's back or acting together as a group. Like water seeks and holds on to water when it moves over the earth, following the same road to the same destination.

Ideogram of the hexagram name: two people standing or walking behind or next to each other. It means: stand by, juxtapose. Later: to be close to, compare, equal, similar. Everyone is part of the whole. A district in a larger village or city with a local organization.

Hex.08 is the contrast of 14, Heaven and Fire: working for your own gain or goal or working with your own strengths and talents.
Hex.08 is about being one of a group, following a leader. Like all clans working with Yu and his ideal to contain the floods of the river, or a community which has a major and an administration for the organization and safety of the neighborhood. The group can be as small as two people, but the common goal is bigger than each individual's wishes.

When Yu the Great had conquered the flood, he held an assembly of the lords. He did so in order to found a state, the only way to conquer floods or enemies with joined forces. He “founded innumerable territories, maintaining close relations with the feudal lords”. This was the beginning of the Xia dynasty, the first one of the three big dynasties.
It is the making of foundations, and it is extremely important that they are perfect. A small imperfection at the beginning will be a huge flaw at the end. So he rejected FangFeng, who arrived too late for the meeting, and beheaded him. “The man who comes late: misfortune”. (Afterwards it turned out to be a mistake, FangFeng was late because he helped someone in trouble)
“Source of oracle consulting”: when people join forces, everyone has responsibilities. There is not just one master whose words are the law. So there will be meetings with discussions and agreements. To prevent fights, a neutral voice is needed, a voice from the gods. Not one summoned by sacrifices, which brings good fortune, but one summoned by a question, bringing an answer.